THE next few essays will introduce a small compendium of poetry collections otherwise intended for relatively small readers who might reach a few more people by jotting them down here. For starters, there’s a larger context of appreciation for them and a sense of their intrinsic worth.

It seems fairly clear, looking at the whole terrain of a century of Scottish poetry, that the mainstreams and characters of the different decades could be roughly characterized in this way. In the 1920s, in the aftermath of the First World War, the Russian Revolution and the Easter Rising in Ireland, Hugh MacDiarmid galvanized the Scottish literary renaissance in poetry, literature, all the arts and politics, to open the prospects and possibilities of a multi-faceted, multi-voiced nation, distinct from the unitary imperial history of the British Empire so catastrophically concluded in the second decade of the last century – and yet still not over. Look at the zombies in Whitehall.

In the aftermath of World War II, another rising tide of poets, mostly men, produced a large body of poetry in what came to be known as the “Seven Poets” generation. Where MacDiarmid had evoked a single nation with diverse identities, from the Borders to Shetland, from Montrose to the Hebrides, this society favored particular places: Norman MacCaig in Edinburgh and Lochinver, Sorley MacLean in Raasay and Skye, Iain Crichton Smith in Lewis, George Mackay Brown in Orkney, Robert Garioch, Sydney Goodsir Smith in Edinburgh, Edwin Morgan (below) in Glasgow. There were many other poets working at these times and others, but these names suggest particular geographical priorities.

Since the 1970s, another generation, predominantly female, starting more emphatically with Liz Lochhead and opening up to another diversity of voices, has once again changed the scene. Meg Bateman, Jackie Kay, Kathleen Jamie, Gerda Stevenson, Bashabi Fraser, Gerrie Fellows and Elizabeth Burns all developed new forms of poetry that established not only the voices, perspectives and experiences of women at the heart of the story of Scottish poetry, but also the fact that the judgments of women have the same value as those of men.

Patriarchy was not self-imposed by the previous generation of poets, but was inescapable simply because of their masculinity. And yet no succeeding poet of any worth has failed to learn from their predecessors, and MacCaig, Crichton Smith, MacLean, Mackay Brown, and perhaps especially Morgan. All types of writing demonstrated from which later generations learned. The scene changed, however, and the geographical predilections of these men were supplemented and corrected by the gendered voices of their successors.

Perhaps the most obvious aspect of this is in the interweaving of national realities in every sense of the international or “masculine” priorities of “political” poetry. At least since the 1970s, the second-wave feminist statement of intent made powerful in the slogan “The personal IS the political” has been subsumed into poetic practice.

Thus Liz Lochhead in her groundbreaking first book, Memo for Spring (1972), satirically and scornfully describes herself as a woman reading the Mirror and her boyfriend as a man reading the Observer: A Caustic Summary and witty which she would explicitly and explosively tear down in Mirror’s Song from Dreaming Frankenstein (1984), one of the great poems of the past 50 years:

Break me the mirror

coffin, the one that keeps your best black self on ice.

Crush me, she’ll crush back –

“Crush me for your daughters and your dead/mothers, enemy of the widows/singles of the first and of all wars” and from this demolition, from this “cave from which she will come out of her claws”, emerges “a woman who is giving birth. “It’s one of those rare things, an angry poem that stays angry. Rage is its justified food. And there is no turning back. And there’s no reason not to keep this rage going.

So when Elizabeth Burns writes a beautiful, moving, tender and calm poem, “Listening to Bach’s Mass in B minor in the kitchen” or her seminal exposition of the meaning of rocking and being rocked in her poem “Held” (for my money, another recent classic), there’s no denying the presence of the feminine in the best poems of the last few decades, a presence harder to find in the ethos of the 1950s and 1960s. That’s a lead.

And, since the 1990s, another philosophy has taken hold: the world of online technology. This has led to an immense proliferation of electronic publishing platforms accompanied by a vertical decline in literary criticism, public intellectual engagement of any kind in the mass media, a general rule of literary incompetence in politics and the almost absolute absence of any critical critique of new works or revaluation of the old.

“Dead white men” may be out of fashion, but there’s still a lot to learn from them (well, some of them), and always will. Good poets always know who to learn from, and whatever their disposition, they are inherently subversive of the foreclosures of one-sided assertion. All the arts are dialogues, generally with the dead. How else can you learn?

Since 2000, too, a predominant priority of ecological self-awareness has affected the work of poets to a further degree, in poems by men as well as women, with poets diverse in their geographical affiliation, whether settlers or indigenous, ancestrally linked to a certain geography or multiple national histories. The best of us will welcome such a sense of difference. It helps to measure value in the depths of knowledge and experience. What brings us more or less to now, and to a world where it’s almost impossible to tell, as you might have said 50, 70 or 100 years ago, are the big numbers: look at them, pay attention what they do next. You will learn from them.

It may just be that the achievements are more clearly visible after time passes. And other people will draw the cards in different ways, of course. This one is mine, as best I can, and I can show quality, but there are always other perspectives, and priorities change.

These days, there are so many writers doing so many things and many of them are worth looking at, but none of them rise above all the others. Perhaps the best way to appreciate any of them is to take the time to come here and there, with your own preferences, not with an agenda but simply armed with the inherent optimism of curiosity.

The books by Lesley Benzie Fessen/Reared (Glasgow: Seahorse Publications, 2020) and Sewn Up (Glasgow: Wisdom Teeth, 2000) testify to the hope that poetry generates, neither pious nor sentimental, but hard. Because poems slow you down and convey images that stay with you, rather than the forms of reportage that come out with every day’s newspaper or into the ether with everything else on the screens, they stay with you. 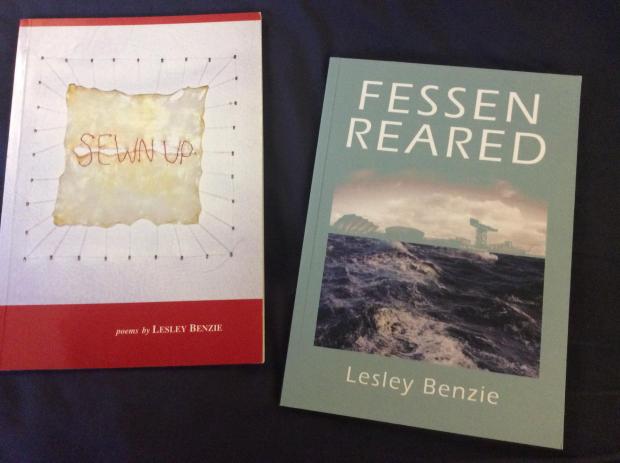 In Fessen/Reared we read the story of John Pilger, “backed by meticulous research”, sitting across from a US senator, reporting on the role of the US in destabilizing Chile, El Salvador, Nicaragua , Haiti and Venezuela. The intensity of the drama of personal confrontation makes the human horror intensely memorable. Violence practiced, self-righteousness affirmed, humanity defended, against all odds. There are wonderful, intimate poems imagining Joan Eardley in Catterline, and in Glasgow, where the economic forces and world-dehumanizing brutalities so pressing in John Pilger’s poem are also behind poverty, fishing cottages and their austerity, the tenement children in Rottenrow, whom Eardley’s paintings bring to life through time.

In Sewn Up, affectionate and evocative poems of the place, “Tobermory” or “Calgary Beach”, rub shoulders with poems reporting on the human cost of the massacres in Rwanda. Why do people turn around so violently? Why are we killing each other so much? It’s only when you take the issues away from the mundanity of political reporting and into the world of the pause, that you dwell on them and carefully consider what the words mean, what those actions are, only through the stillness and distance given to thought conferred by art, can we find answers that allow us to strengthen the necessary opposition.

Similarly, there is no excuse for “the relentless sentimental dross written, sung and filmed about love”. We have to be tougher than the popular media. The title “Sewn Up” refers to the healing sutures given to children whose mouths have been sliced ​​to the ears by machetes wielded by adults. Their faces may forever be disfigured, but their lives and their appetites may be renewed.

Ours too, if we can read and use our imagination and critical skills as effectively as we need to. The arts are no longer the privilege of the idle rich, the pontificating church, the greedy royalty, the wealthy, the landed classes, the tofs and the twerps. Their provision is a necessity, survival is their only promise. The world demands it of all of us. And Scotland, more than ever.