Poet Gary Lawless and photographer Beth Leonard at their Gulf of Maine Books in Brunswick. (Photo by Emily Hayes)

Since the 1970s, Gary Lawless, a resident of Nobleboro and a native of Maine, has written poetry that explores the natural world and ideas of environmentalism. One of his poems about endangered animals, and treating every creature as if it were the last of its kind to exist, has been translated and published in Italy by a group of environmentalists.

“Basically they stole it,” Lawless joked, leaning against the counter of his bookstore, Gulf of Maine Books, in Brunswick.

After receiving a copy of the Italian version in the mail, Lawless said he told environmentalists they could publish any of his works. The offer ignited a lasting bond between the Lincoln County poet and the environmental movement in Italy. Four of his works have been translated and published in Italian, and he traveled from Naples to Slovenia to read his works to an audience of conservationists.

Lawless and his wife, Beth Leonard, spent a month in Venice for a writing residency in 2017. His new poetry book, “How the Stones Came to Venice,” published last week by publisher Littoral Books, is looks at the questions the poet was asking himself. where the stones come from to build the city from a lagoon.

Leonard took all of the photographs included in the poetry collection.

“From there was born that connection with a bunch of people over there, because they were part of this environmentalist network of farmers, poets, artisans and musicians,” said Lawless, between purchasing management in his store.

Right after opening at 10 a.m. on a Friday, customers were already flocking to the Gulf of Maine, most of them for the purpose of a particular book Lawless had ordered from them. Most of them were also friends of Lawless and Leonard, who also have deep roots in the poetic community of Midcoast Maine. 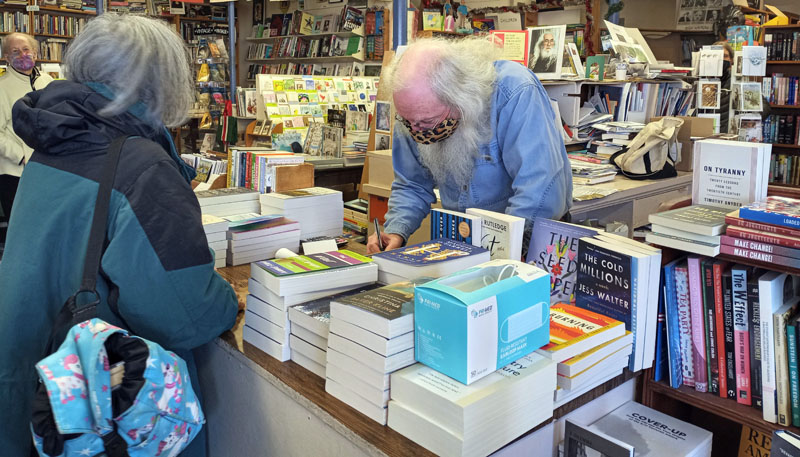 Before opening the bookstore in 1979, Lawless traveled through California as he did in Italy, making connections and forming friendships with people from different backgrounds than his in Belfast.

His experience in the mountains opened his eyes to the value of travel and new ideas, even though he returned less than a year later to his home country.

The couple’s home in Nobleboro, a farmhouse built in the early 1800s, was once owned by writers Henry Beston and Elizabeth Coatsworth. Beston was a naturalist writer and leader of the American environmental movement, and Coatsworth won the Newbery Medal for a children’s book she wrote in 1931. Both are buried next to the house.

Their daughter, Kate Barnes, Maine’s first poet laureate, asked Lawless and Leonard to move into the house in 1986 to care for her six work horses after her parents died. Barnes never cleaned up the house until his death in 2013, leaving the land, the house, and everything in it to Lawless and Leonard.

The furnishings are the same, and Lawless said he even wore some of Beston’s clothes.

“It’s a little scary,” Lawless said, because he knows so much about the previous owners of the house from their books.

“Kate has always said that the main culture on the farm is words,” he said.

In honor of the writers, Lawless placed the farm and land, known as Chimney Farm, under a conservation easement to ensure it is protected as a conservation and historic site indefinitely by the Midcoast Conservancy , with nearly 90 acres and 6,000 feet of protected shoreline.

In his poetry and the community of progressive readers who frequent Gulf of Maine Books, Lawless said he wanted people to “think more closely about their connection to the natural world around them.”

His poetic works, such as “Caribuddhism”, include human beings and the community as part of the natural world. 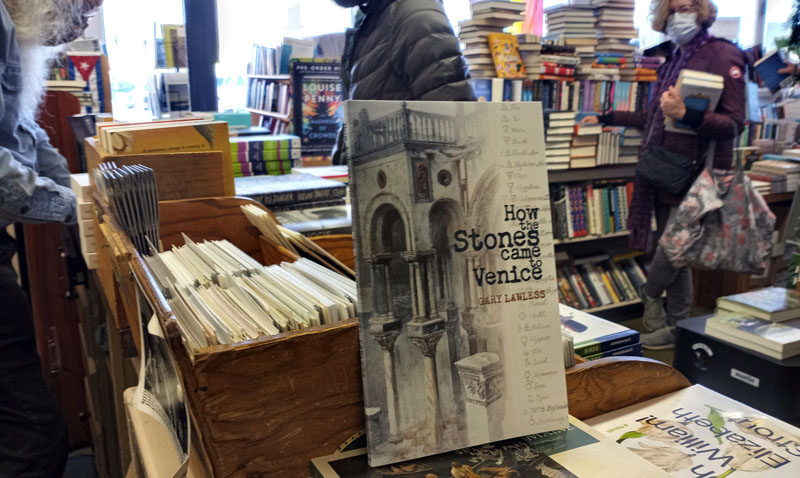 Gary Lawless’s new poetic work, “How the Stones Came to Venice,” is available in his Gulf of Maine Books bookstore or online with publisher Littoral Books. (Photo by Emily Hayes)

“I used to do a lot of things for trees and wolves, but some people pointed out to me that I neglected my own kind,” Lawless said.

For the past 40 years, he has led writing projects for people with disabilities and worked with homeless people in Portland, helping them share their stories.

The goal of Lawless’s work is to help people express themselves as he does through poetry, which will create a “way we can all live in peace on the planet without hurting each other” , did he declare.

Beyond Italy, Lawless’s poetry has taken him to countries like Cuba, Latvia and Lithuania. While grateful to share his work across the world and learn from new people, the communities of Nobleboro and Brunswick are home to Lawless and Leonard.

“Nobleboro is this very beautiful place that hasn’t been spoiled too much by humans, and there are humans in and around it who want it to remain a beautiful place,” Lawless said.

“I mean, there are holidays in May to welcome alewife! These are the people I want to date.