The first book I read by famed genre historian, producer/director, and writer David J. Skal was either The Monster Show: A Cultural History of Horror Where Death Makes a Holiday: A Cultural History of Halloween. Both are amazing and must-have works for horror fans. Skal’s exhaustive research and carefully crafted writing demonstrate just how shrewd and transcendent nonfiction can be, and treats the horror genre with the reverence it deserves.

David J. Skal made his debut in 1990 with Gothic Hollywood: The Tangled Web of Dracula from the novel to the stage to the screen, an early example of his passion for classic horror. In 1993, Skal approaches the whole horror genre with The monster show, a voluminous and extremely entertaining book. (psychology author Robert Bloch declared it “The best horror movie book I’ve ever read”.) In a series of chapters with witty names like “Drive-Ins Are a Ghoul’s Best Friend ‘ and ‘Scar Wars’, Skal explores everything from German Expressionism to films like The Office of Dr. Caligari to more modern terrors like An American werewolf in London.

FANGORIA is prominently featured in “Scar Wars”, with both an appreciative evaluation of the publication – “printed in color, the better to reproduce its centerfolds and leaflets of lovingly photographed carnage, as a necrophiliac parody of Playboy”–and a glimpse of the controversy it generated. Skal explains that he was banned from a Canadian convenience store chain, while “in England, FANGORIA caused a Downing Street nightmare for Prime Minister Margaret Thatcher, who called it ‘absolutely appalling’ and urged a deputy to determine whether the magazine had fallen. under the Obscene Publications Act 1959. It is not. It exemplifies the wit and humor that drives the book and gives Skal’s work a distinctive narrative voice.

The monster show is also marked by the fine cultural and historical analysis of the author. In “Dread and Circuses”, Skal relates Lon Chaney’s grotesque characters, including the Phantom of the Opera, to both disfigured World War I veterans and contemporary art movements. “Chaney’s plastic experiments on his own body overshadowed the simultaneous efforts of emerging Cubist, Dadaist and Surrealist painters to stretch the human form into increasingly bizarre configurations,” he observes. In “Rotten Blood”, Skal writes about how the AIDS crisis was reflected in horror, particularly vampire stories, while discussing Anne Rice’s connections and popularity with the gay community, stating that “his sympathetic portrayal of an alternative, supernaturalized sexuality surviving a world of death conveys a complicated message of healing to a community that has suffered, and continues to suffer, a concentrated level of human loss unprecedented outside of war — or the medieval plague Skal himself is gay, giving him additional insight into LGBTQ+ history and culture. 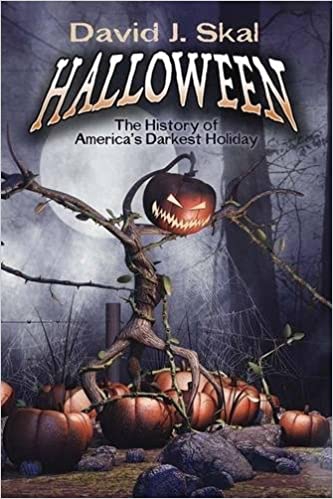 This story is highlighted in its wonderful Death Makes a Holiday: A Cultural History of Halloween. death makes vacation consists of a series of essays, such as “Home Is Where the Hearse Is: Or How to Haunt a House”, “The Devil in Castro Street and Other Skirmishes in the Culture Wars” and “Halloween at the screen”. The book is both very informative and extremely entertaining. In one of my favorite chapters, “The Witch’s Teat”, Skal writes: “The accused witches in New England have been subjected to grueling trials, but perhaps none so difficult as finding a parking space in the modern town of Salem on a typical October weekend.” As a Massachusetts native, I particularly enjoy this exploration of how Salem became “witch town,” a Halloween tourist mecca. Skal details the strange events of the Salem witch trials, while emphasizing the disconnect between the macabre past and the capitalist present: “The trials would eventually take on the commercial patina of a festival whose purpose and meaning would be utterly mystifying and, without no doubt, abominable.

“The Devil on Castro Street” introduced me to vital gay history. The essay identifies José Sarria, a waiter and performer at San Francisco’s Black Cat Café, as “a pioneering gay activist who injected scathing political commentary into his performances…and encouraged men shaken by ‘moral indictments’ to demand jury trials, in which the lack of evidence would be evident. Sarria ran for the supervisory board in 1961, a bold move for a gay man. Sadly, the Black Cat Café was shut down by homophobic local police on Halloween 1963, in a struggle that mirrored tensions between the cops and LGBTQ+ communities across the country.

“In the years leading up to the provocative Stonewall Riots of 1969, in which Greenwich Village drag queens violently refused to acquiesce to police harassment, the placard was brutally enforced,” Skal writes. “Fortunately, the closet had plenty of costumes.” The author notes the special attention that drag queens attract from the media during Halloween and Pride events, which irritates assimilationists; he cleverly points out that “drag queens have always been at the forefront of gay activism, if only because of their inherently increased visibility.” I’ve referenced this statement many times over the past few years – including or replacing “trans people” with drag queens – because it provides important historical context and relates so much to our current climate ( in which the trans community has become the most visible community and frequently attacked part of the LGBTQ+ community). While Skal particularly focuses on the tumultuous history of Halloween in the Castro district of San Francisco, it largely conveys the special meaning of Halloween for queer people.

“Home Is Where the Hearse Is” is an excellent examination of haunted houses, from the high-tech thrills of Disneyland and Universal Studios to the local magic of “yard haunters.” Skal writes about the likes of Bob Burns, a Burbank resident and collector of horror and sci-fi movies who created dazzling installations in and around his home beginning in 1967. Rochelle Santopoalo, editor of Happy Halloween magazine and expert on the backyard haunter phenomenon, notes how haunted houses in the neighborhood “seemed to regain a sense of community”. “People came year after year to this house – they were like beacons,” she tells Skal. “Because of the stability of this particular recurring event, there was an instant sense of camaraderie. They put up a welcome sign – they say ‘We’re open’. We want you to come.” This chapter particularly touched me near my home as a veteran of Halloween 313, a local haunted house show that ran for over twenty-five years in the Clinton Hill neighborhood of Brooklyn.Initiated by my friend Janna, known locally as “the lady of Halloween,” the show involved a massive stage, dozens of local volunteers, and Broadway-style production values ​​that drew thousands of neighborhood kids year after year.Skal’s book compares the editing of a haunted house at the elevation of a barn, and that’s exactly how I felt, coming together year after year with the other “Halloweenies” coming together to put on the show.

In the two decades since death makes vacationSkal has kept busy, writing, directing and producing feature documentaries about classic horror films and writing books like Claude Rains: the voice of an actor and, more recently, the 2020s Fright Favorites: 31 Movies to Haunt Your Halloween and Beyond. Fear Favoritesdedicated “To Monster Kids of All Ages Everywhere”, demonstrates the precision and insight of Skal’s writing, with astute analyzes of films like Nosferatu: A Symphony of Horror, Halloweenand get out. In his review of night of the living deadSkal observes:

“[George] Romero wanted no social comment; he had, for example, chosen Duane Jones for his talent as an actor and for not sending a message about race. But because the socio-political climate of 1968 was so unstable, many viewers simply saw viewing the film as a kind of protest, a transgressive gesture against the stubborn status quo represented by parents, film critics and even editorial writers who are insurgent against the film. ”

David J. Skal continues to explore the horror genre in clever, surprising and provocative ways. We are lucky to have his voice.