Get the latest Syracuse news delivered straight to your inbox.
Subscribe to our newsletter here.

Matthew Sala and Lindy Melegari have more in common than being first-year neighbors at Sadler Hall and currently living in the same house. They are both first responders and 2021-2022 Remembrance Fellows.

This year marks the 33rd anniversary of the terrorist attack on Pan Am Flight 103, which left 270 people dead. Each year, Syracuse University selects 35 students to represent the 35 students who were killed on this flight while returning home from a study abroad program. These students, known as Remembrance Fellows, hold one of the highest honors an undergraduate student can receive.

Sala, originally from Old Bethpage, New York, graduated in psychology and neuroscience from the College of Arts and Sciences. He is also a Field Supervisor for the League Ambulance and President of the Phi Delta Epsilon International Medical Fraternity.

Sala knew he wanted to apply to be a Remembrance Fellow when he performed at his freshman’s rose-laying ceremony with Otto Tunes, an all-male a cappella group. Sala put her “heart and soul” into her candidacy and ultimately received the title of Remembrance Fellow.

“I felt so deeply honored,” said Sala. “I have always had such admiration for people who have been Remembrance Fellows.

Sala represents Turhan Michael Ergin, victim of the Pan-American bombing. Ergin was a member of the drama program and the lacrosse team and wrote for the sports section of a newspaper.

“One of my favorite things about getting to know (Ergin) is learning your voice,” Sala said. “He communicated his emotions so well and captured the thrill of athleticism in his sports writing.”

While Ergin was abroad, he wrote a poem called “An Ode to Thanksgiving” to express his appreciation for those he cared about. Ergin and his friends had planned to throw a homecoming party after their flight landed.

Sala says he sees a lot of connections between being a remembrance seeker and working with the SUA.

“Students, through their hard work and dedication, can make a real impact on the lives and experiences of other members of the community,” said Sala. 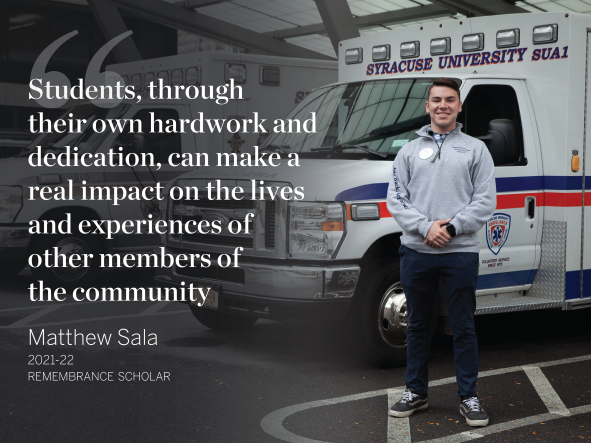 Sala said the Remembrance Fellow’s motto, “Look back, act forward,” could be related to her role.

“Acting inward and acting outward are really similar, in that we act for others,” said Sala. “The deep tragedy of Pan Am Flight 103 taught us the power of community and the things people can accomplish… how our actions can have a profound effect on others, in both positive and negative lessons. ”

Melegari, a bioengineering major in the College of Engineering and Computer Science on a pre-med track, is a senior from Pittsburgh, Pennsylvania. In addition to being a Remembrance Fellow, she wears hats in many organizations, including the student-led theater organization First Year Players, the a cappella group The Mandarins, and Ottothon.

In addition to his other responsibilities, Melegari is EMT for the Manlius Fire Department. Like Sala, she believes her involvement as an EMT and her role as a Remembrance Fellow go hand in hand. She said that many people do not realize how often acts of terrorism are included in the EMT training course. She believes that as an EMT and Remembrance Fellow, she is able to help one person at a time.

Melegari knew she wanted to be a Remembrance Fellow, but she was nervous about applying. But if she didn’t apply, she knew she would always wonder what would have happened if she had been granted this honor.

“I put that fear aside and I was like, you know what, you gotta show them you“said Melegari.

Melegari said her mother, who constantly reminded her of her self-worth, motivated her to apply. When she received the email that she had received the scholarship, she was elated.

Melegari represents Frederick “Sandy” Phillips, who had a cheerful personality and was known to play pranks on one of his teachers. Melegari relates to Phillips through their silly personalities and love for the guitar.

Melegari felt so connected to Phillips that she decided to get a tattoo on her arm with Phillips’ name, the seat number on the flight, and a poem he wrote. 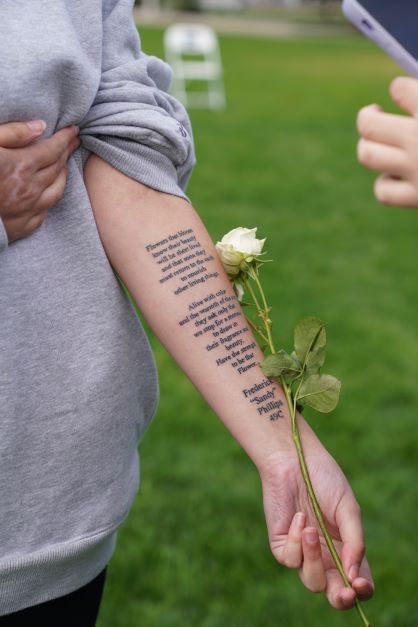 “Flowers that bloom know their beauty

Will be short lived and that soon they

Must return to earth for food

Living with the color and warmth of the

Sun, they only ask that we stop for a

moment to tap into their scent and

beauty. Have the strength to be that

This poem is a reminder in Melegari’s daily life not to stress about the future and to enjoy the present moment.

“He’s taught me to really slow down and enjoy those things in life that you love while pursuing your goals,” Melegari said. “He really taught me… to live in the moment… to let your color and your beauty come out, and to be able to do more than just have one goal – don’t let that goal define you.” 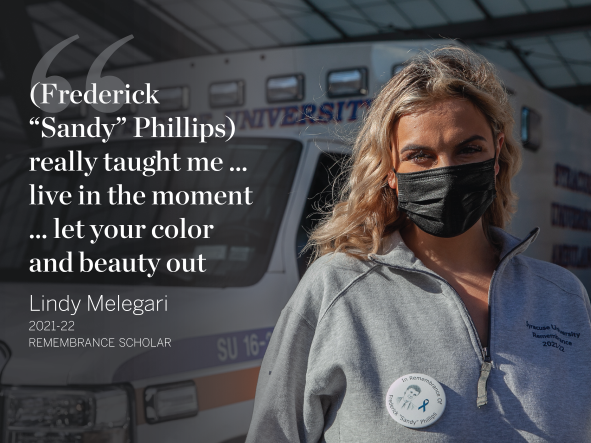