Write an inheritance in their residence

Writer Grace Talusan and poet Chen Chen, respectively Writer-in-Residence Fannie Hurst and Poet-in-Residence Jacob Ziskind at Brandeis, can split their time between teaching classes and completing their personal writing projects. As a result, their art is flourishing.

While the two have won numerous awards as writers, the nonprofit American Artists of Chicago honored Chen and Talusan as 2022 Fellows “for their remarkable artistic vision and commitment to the community – both in their specific regions and in the discipline at large” with an unrestricted grant of $50,000 each. Only six winners are selected after being nominated by a diverse and rotating group of artists and arts professionals. From the national selection of talented writers, these two are the pride of the Brandeis writing community. “I do my best to write here,” Talusan said. “It was an incredible experience for me.”

For Talusan and Chen, writing has been a lifelong pursuit of passion and self-discovery. As a child, Chen struggled to come to terms with his identity as Asian American and queer. He found solace in expressing his feelings and navigating his identity through writing. “I’ve always loved telling stories,” Chen said. “I needed an outlet for the things I was going through. Poetry became a way for me to express personal things that I was not ready to share.

Chen eventually came to terms with his sexuality, but still struggled with his identity. “I wasn’t sure how to label myself,” Chen said. “I was born in China and my parents called themselves Chinese, but I spent most of my life in America. It wasn’t until college that I realized I was an American from Asian origin.

As a teacher, he enjoys sharing Asian American stories with his students. “It means so much to me that we’re seeing more Asian American writers and I’m able to share their work with my students,” Chen said. “It is an honor and a privilege. When Chen is not teaching, he can be found developing new poetry. His first book, When I grow up I want to be a list of other possibilities (BOA Editions, 2017), was shortlisted for the National Book Award and won the Thom Gunn Prize, among other accolades. His next book, Your emergency contact has experienced an emergency, will be released in the fall of 2022. 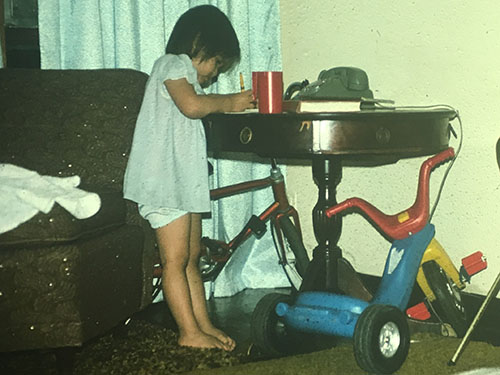 Talusan picked up a pen to write before he could even read.

Talusan also always had a love for writing, but traveled many different paths before pursuing writing and arriving at Brandeis. Even as a child, she had a sense of her passion. “My dad took a picture of me pretending to write before I even knew how to read,” Talusan said. Growing up, she spent her summers in high school attending writing camps at the University of Virginia and Harvard University, but never thought about pursuing a career in writing. “Writing is something that I just enjoyed doing,” Talusan said. “The arts didn’t seem like a doable thing for me to do professionally.”

Talusan found herself on the opposite path to college, pursuing a career in the medical field. It wasn’t until a memorable experience during a hospital internship that she realized it wasn’t a game. “I passed out while watching a medical procedure,” Talusan said. She realized that she had to follow her passion for writing. After teaching writing at Tufts University for many years, Talusan accepted a position at Brandeis that was the perfect balance between teaching and writing.

Talusan is also very proud to teach her classes at Brandeis. As a Filipino immigrant, she shares Chen Chen’s pride in bringing Asian American voices to her classes. She observes that for many of her students, this is the first time that they see themselves represented in college texts.

“I have Asian American students who go through 12 years of study without ever reading authors who share identities with them,” Talusan said. “Also, my class is often their first experience with a teacher who is a woman of color or Filipina American.”

Both Chen and Talusan are dedicated to inspiring Brandeis students to share their voices through their writing. “I’m often surprised by students from other majors and minors who come to class and get so much out of it,” Chen said. “Often we don’t stop and take time to reflect on our own lives. My poetry class gives students that space.

While both writers are busy producing their own award-winning works, they’re inspiring the next generation of writers to share their own stories.

“When I write, I imagine my nieces and nephews and my students as readers,” Talusan said. “I hope my writing adds a diverse voice in the classroom and inspires others to write their stories.”